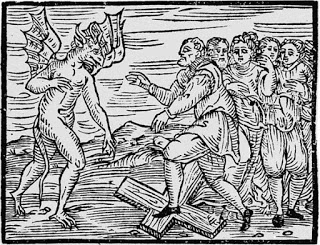 My brain is like a pinball, a few more lifetimes would do me good.   There is rarely enough time and I am often unfocused, distracted and prone to procrastination.

This is my excuse for why The Devil And Daniel Kincade never came to be.  That and a severe lack of money.

The Devil And Daniel Kincade was that difficult second album, the one that still hasn’t been finished. It existed in concept and as a series of demos – an hour-long musical, telling the sad fate of Daniel Kincade, an impoverished would-be bank robber, who sells his soul to the devil for a chance to see how life could have been.

It came from a naive ambition, and as such, embodied a little glimmer of the magic that lurks therein. A childhood filled with tales of boxcars, macabre transactions at crossroads and notions of hell and damnation. The demos are unfinished, lyrically or musically inconsistent and sometimes no more than sound bites. The more complete tracks give some colour to what it could have been:

The play was narrated by a lost soul who is first seen in the opening act, lamenting the sad fate of our protagonist:

We then opened on a busy street in 1930s America, factory workers and vendors, join a chorus setting the scene for Daniel Kincade – down and out, laid off, pockets full of lint and dust.

Returning home to his wife, Elaine and their child, it becomes clear that Daniel will have to find some source of income to survive, a lonely night, a bottle of rye and .44.  Daniel wakes with a desperate plan and heads for the city bank.

Daniel escapes through the rear of the bank and inot the long grass but is wounded by a gunshot. He runs on in vain.

Eventually Daniel collapses and awakes in a dank cell. Elaine visits and tells him of his failures as a man, that he has given up what good he had in pursuit of base things

Daniel turns against the court.

Daniel sits alone in his cell and renounces all good.

In this silence and by pale moonlight, the devil appears to him and offers a deal – to be free in exchange for his mortal soul.

Daniel is released the next day. He heads straight for his home but discovers that no one, not even his own family take notice of him – for a man without a soul, is not a man at all.

The demos here grow scrappy and even I’m not sure what happens.

In concept though, Daniel eventually decides that the world would be better off without him, and so to spare those that had suffered because of him, he begs the devil for one last deal – the world as if he never existed at all.

The devil agrees and Daniel in reflection, decides that these things are not so bad after all.

Though The Devil And Daniel Kincade may never be, I hope these demos will provide some small entertainment in passing.

If not, may you find greener pastures a little further along the road.