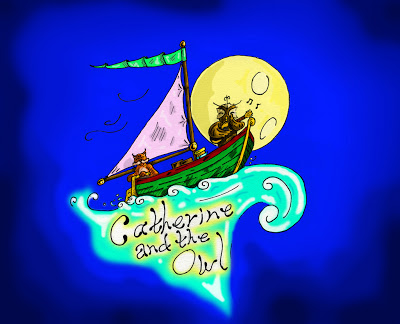 Whilst digging around on my computer I found a couple of other drawings that I had done ages ago.

Neither of which have been shared with that many people.

The first is a drawing I did for Catherine And The Owl. I seem to remember doing this for the poster to our first gig.

I coloured it in just to see how it would look. Clearly inspired by Edward Lear (though he could draw better).

The second Illustration is from some bizarre comic I was drawing called, ‘The Billy Corgon Story’.

I can’t quite remember why, but I know it used to annoy my friend Tim when I claimed the back of the Melon Collie album was a picture of Billy’s bald head slipping beneath the clouds.

Not sure where I was going with this, but I do know that the story involved Billy getting on a ship bound for WW2 that was captained by the infamous ‘headless Jack’.
After three years at sea, Billy discovered ‘Headless Jack’ was in fact a decapitated corpse and that he had been sailing in circles off the coast of Ireland.

I probably shouldn’t be allowed so much free time…

Well there you are, hope you enjoy.