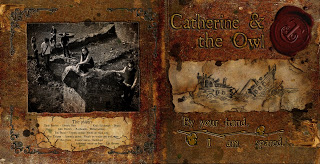 Since there is very little in the way of images for the By your hand, I am spared EP, I thought it’s about time they appear somewhere. I don’t tend to mention my graphics work too much, but I’m a bit of a dab hand in the old photoshop.

I can’t take credit for the original Cato logo though, that was a fabulous bit of design by Ren X.

The process involved a mix of media – all the illustrations were hand drawn by myself, many of the textures were created specially and for the under disc image, a 3D model was built.

The photo that appears on the booklet back was taken by Emily Ings. Not much to say for the cover – i have uploaded the image at a massive size so anyone into graphics can see how it was put together.

The inside of the booklet was put together in photoshop using original illustrations which i had lazily done in pencil whilst watching the Die Hard trilogy (I know there’s four but i didn’t get that far).  The original concept for the EP was sinking ships, but the band wanted the track ‘Bergundi‘ to be the title track.  The problem was, Bergundi was eight minutes long, and for fear of annoying people by putting it first, the track was moved to the end of the EP. The title was then chosen from a lyric in the song, hopefully letting people know it was the intended as the meat of the CD.

To reflect the original title – a sinking ship appears on the cover, then again in the centre. Representing the track Loose Lips, Sink Ships.

Reflecting each track in order is a lighthouse – for Inro (Inro being a Japanese medicine box, the original title ‘Beautiful Genocide’ was thought to have a whiff of the gas chamber about it.) A sinking ship for Loose Lips, Sink Ships. And a house by the sea for Bergundi (a location in the song lyrics.)

In Russian(ish) beside each image appears a choice lyric. ‘If i were a free man’, ‘Cold, Coney Island soul’ and ‘This is the end, of the greatest love affair I ever had (with myself)’, respectively.

The text that appears faintly in the background is from my own novel ‘Cold Highways‘ – so there is no danger of copyright infringement should it be legible.

Here are the original untouched illustrations.

Not much to say about the disc really, as it’s pretty straight forward – the texture was originally made for a web background but never used.

The back cover was chopped together in photoshop – close inspection will reveal how the books, shelves and labels are all seperately put together in layers.  The books were taken from an antique book database painstakingly cut out – shadows and highlights were then painted in manually to add depth to the image. The titles and extra text was then added to complete the image – lovely.

The inside tray liner is a photograph of a 3D model I built for the project.  The model follows the book theme – with old Catherine and the owl posters disappearing into a deep void (original posters designed by Ren X). Dunno why they’re doing that, perhaps it’s a metaphor for our career – I dunno.

The tiles on the walkways were hand painted using my great skills that were acquired by painting warhammer models as a kid. In retrospect i wish i had built the model much deeper, as the effect is not quite as i hoped.  All the posters were supported on wire which a removed in photoshop later.

These two slightly ropey photos show slightly more detail of the model.  The texture at the base was knocked together out of several photos of tunnels and tubes.

And here is a couple of pictures showing the exterior of the model and how it was crudely lit – light below came through my conveniently glass table.

Anyway, that is the Catherine And The Owl ‘By your hand, I am spared’ EP design.

It is available to purchase on itunes.